Mark Zuckerberg clarifies: ‘I personally find Holocaust denial deeply offensive, and I absolutely didn’t intend to defend the intent of people who deny that.’

The Facebook founder has attracted controversy for how the social network deals with content that is offensive to many, such as Holocaust deniers

I just got this email from Facebook CEO and founder Mark Zuckerberg, clarifying remarks he made in an Recode Decode podcast interview I did with him yesterday.

First, read it in its entirety:

I enjoyed our conversation yesterday, but there’s one thing I want to clear up. I personally find Holocaust denial deeply offensive, and I absolutely didn’t intend to defend the intent of people who deny that.

Our goal with fake news is not to prevent anyone from saying something untrue — but to stop fake news and misinformation spreading across our services. If something is spreading and is rated false by fact checkers, it would lose the vast majority of its distribution in News Feed. And of course if a post crossed line into advocating for violence or hate against a particular group, it would be removed. These issues are very challenging but I believe that often the best way to fight offensive bad speech is with good speech.

I look forward to catching up again soon.

For those who don’t know the back story, Zuckerberg talked about a range of things in the 90-minute interview, from privacy to news to China to who is responsible for the Russian election meddling on the powerful social media platform he created (he is!).

But one series of remarks he made to illustrate how he and the company think about controversial and false content that is allowed on the platform has attracted some criticism. After I asked about what Facebook should do about false news, such as some of the content that is published on a site like Infowars, Zuckerberg gave an unprompted example of Holocaust deniers to make his point about allowing hoaxes to be published on the site.

Here is the whole exchange between us:

Okay. “Sandy Hook didn’t happen” is not a debate. It is false. You can’t just take that down?

I agree that it is false.

I also think that going to someone who is a victim of Sandy Hook and telling them, “Hey, no, you’re a liar” — that is harassment, and we actually will take that down. But overall, let’s take this whole closer to home…

I’m Jewish, and there’s a set of people who deny that the Holocaust happened.

I find that deeply offensive. But at the end of the day, I don’t believe that our platform should take that down because I think there are things that different people get wrong. I don’t think that they’re intentionally getting it wrong, but I think-

In the case of the Holocaust deniers, they might be, but go ahead.

It’s hard to impugn intent and to understand the intent. I just think, as abhorrent as some of those examples are, I think the reality is also that I get things wrong when I speak publicly. I’m sure you do. I’m sure a lot of leaders and public figures we respect do too, and I just don’t think that it is the right thing to say, “We’re going to take someone off the platform if they get things wrong, even multiple times.” What we will do is we’ll say, “Okay, you have your page, and if you’re not trying to organize harm against someone, or attacking someone, then you can put up that content on your page, even if people might disagree with it or find it offensive.” But that doesn’t mean that we have a responsibility to make it widely distributed in News Feed. I think we, actually, to the contrary-

So you move them down? Versus, in Myanmar, where you remove it?

Some on Twitter found Zuckerberg’s point that Holocaust deniers do not intend to impart false information and cause damage was, um, problematic. 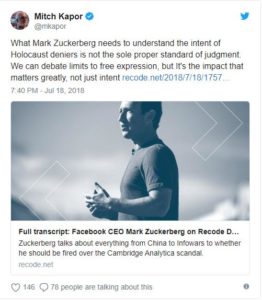 In any case, it’s clear the contentious debate about the power and responsibility of Facebook around what content the world sees — and does not see — on its massive network is not going away soon.