Antisemitic reactions to this summer’s conflict between Israel and Hamas resulted in record levels of antisemitic hate incidents in the UK, according to new figures released by CST today.

The 302 antisemitic incidents recorded in July 2014 is the highest ever monthly total recorded by CST. The previous record high of 289 incidents in January 2009 coincided with a previous period of conflict between Israel and Hamas. CST also recorded at least 150 antisemitic incidents in August 2014, making it the third-highest monthly total on record. The totals for July and August are expected to rise further as more incident reports reach CST. 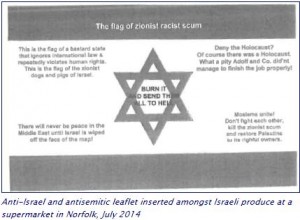 155 of the 302 incidents recorded in July (51%) involved direct reference to the ongoing conflict in Israel and Gaza. All incidents require evidence of antisemitic language, targeting or motivation alongside any anti-Israel sentiment to be recorded by CST as an antisemitic incident.

101 antisemitic incidents recorded in July involved the use of language or imagery relating to the Holocaust, of which 25 showed evidence of far right political motivation or beliefs. More commonly, reference to Hitler or the Holocaust was used to taunt or offend Jews, often in relation to events in Israel and Gaza, such as via the twitter hashtag #HitlerWasRight. 76 of the 302 incidents in July (25%) took place on social media. 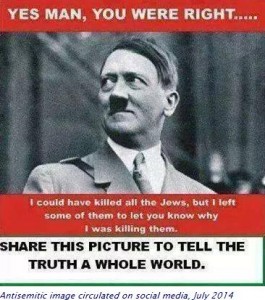 There were 21 violent antisemitic assaults recorded by CST, none of which were classified as ‘Extreme Violence’, which would involve a threat to life or grievous bodily harm (GBH). None of the 21 assaults resulted in serious injury. There were 17 incidents of Damage & Desecration of Jewish property; 218 incidents of Abusive Behaviour, which includes verbal abuse, antisemitic graffiti, antisemitic abuse via social media and one-off cases of hate mail; 33 direct antisemitic threats; and 13 cases of mass-mailed antisemitic leaflets or emails. 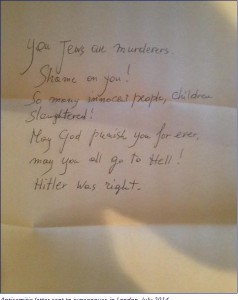 “These statistics speak for themselves: a record number of antisemitic incidents, few of them violent, but involving widespread abuse and threats to Jewish organisations, Jews in public places and on social media. It helps to explain the pressures felt by so many British Jews this summer, with its combination of anti-Jewish hatred and anti-Israel hatred.

The high proportion of offenders who appear to come from sections of the Muslim community is of significant concern, raising fears that the kind of violent antisemitism suffered by French Jews in recent years may yet be repeated here in the UK.

CST will continue working with Police and Government against antisemitism, but we need the support of others. Opposing antisemitism takes actions not words. It is particularly damaging for public figures, be they politicians, journalists or faith leaders, to feed these hatreds by comparing Israel to Nazi Germany or by encouraging extreme forms of public protest and intimidation.

Prosecutors also have their part to play. Those who have used social media to spread antisemitism are identifiable and should be prosecuted.”