A French Jewish watchdog recorded a near doubling of antisemitic incidents in France for the first seven months of 2014 compared to the same period last year.

From Jan. 1 to July 31, SPCJ documented 527 antisemitic incidents compared to 276 in the same period of 2013, the security service reported in a statement Thursday. In all of last year, SPCJ documented 423 incidents.

The bulk of the 91 percent increase this year, SPCJ wrote, “is attributable to a particularly large increase of 126 percent in the ‘violent acts’ category” and “to peaks that corresponded with the anti-Israel protests” of Israel’s conflict with Hamas in Gaza this summer.

Another peak occurred early in 2014 when authorities banned the comedian Dieudonne M’bala M’bala from going on tour with a show deemed antisemitic.

Violent incidents rose to 158 from 70 in the reported time frame. This year’s acts were targeted equally against people and property. 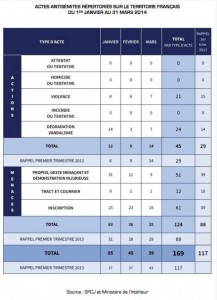