BERLIN, Germany (AFP) — Jewish leaders and Israel’s embassy to Germany on Monday voiced “disgust” over antisemitic images on display at Documenta, one of the world’s biggest art fairs.

Documenta had been clouded in controversy for months over its inclusion of a Palestinian artists’ group strongly critical of the Israeli occupation.

Two days after the show opened to the public, one of the works on display by Indonesian art group Taring Padi also came under fire, over depictions that both the German government and Jewish groups say went too far.

In the same work, a man is depicted with sidelocks often associated with Orthodox Jews, fangs, and bloodshot eyes, and wearing a black hat with the SS insignia.

“We are disgusted by the antisemitic elements publicly displayed at the Documenta 15 exhibition,” Israel’s embassy said in a statement. 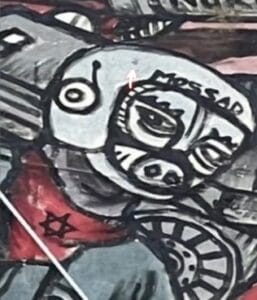 “Elements being portrayed in certain exhibits are reminiscent of propaganda used by Goebbels and his goons during darker times in German history,” it added.

“All red lines have not only been crossed — they have been shattered.”

Josef Schuster, of the Central Council of Jews in Germany, noted that “artistic freedom ends where xenophobia begins.”

Culture Minister Claudia Roth also said this is where “artistic freedom finds its limits,” as she urged the show’s curators to “draw the necessary [conclusions].”

The president of the German-Israel Society, Volker Beck, told the Bild daily newspaper that he was filing a case with prosecutors over the picture.

Documenta, held in the German city of Kassel, includes the works of more than 1,500 participants.

For the first time since its launch in 1955, the show is being curated by a collective, Indonesia’s Ruangrupa.

But even in the run-up to the show’s opening this weekend, the group has come under fire for including the collective called “The Question of Funding,” over its links to the BDS boycott Israel movement.

BDS was branded antisemitic by the German parliament in 2019 and barred from receiving federal funds. Around half of Documenta’s 42 million euro ($44 million) budget comes from public funds.

Opening the exhibition this weekend, German President Frank-Walter Steinmeier said he had considered skipping the event.

“While some criticism is justified of Israeli policies, such as on settlement building,” he said, the recognition of the Israeli state is “the basis and prerequisite of the debate” in Germany.

He called it disturbing that some from outside Europe or North America had refused to take part in cultural events in which Jewish Israelis were participating.

It was striking that no Jewish artist from Israel was represented at this edition of Documenta, he noted.