Antisemitic incitement by Turkish government officials, Turkish President Recep Tayyip Erdogan’s oft-repeated statements that Israel is more barbaric than Hitler, and antisemitic accusations and threats by the media that support and promote Turkey’s AKP ruling party have fostered an upsurge in antisemitism in the country. A recent survey by Gonzo Insight, the Turkish polling institute, found that in just 24 hours, on July 17-18, 2014, 27,309 Turkish Twitter users sent 30,926 Turkish-language tweets in support of Hitler’s genocide against the Jews.[1]

In addition to statements by government officials, the pro-AKP media regularly accuse Turkey’s Jews of “treason,”[2] and other accusations are also levelled, including connecting Jews with the use of Ebola as a biological weapon in “global occupation” that “knows no borders”; in addition, a professor tweeted about sending Jews to Treblinka.

Antisemitism is an accepted part of the government discourse; for example, in protests following the May 2014 mine collapse in Soma, in which over 300 miners died, then-prime minister Erdogan yelled at and scuffled with a miner, calling him “sperm of Israel.”

At the same time that President Erdogan was denying, in his September 22, 2014 speech at the Council of Foreign Relations, that he or his government were in any way antisemitic, members of his party back home were tweeting praise for Hitler, and shops in Istanbul were displaying signs reading “No Admittance To Jewish Dogs.”

On November 9, 2014, a sign reading “This Location To Be Demolished” was hung on the entrance to Istanbul’s Neveh Shalom Synagogue; the synagogue has already been the target of two major terrorist attacks in which many congregants at prayer were killed and wounded.

The following are examples of recent antisemitic statements in Turkey:

Turkish Islamist Columnist: “It Is An Instinct Of The Jew To Do Evil To Men And To Humanity”; “There Is No Life That The Poisonous Hand Of The Jew Doesn’t Touch, No Society To Which The Jew Does Not Bring Decay”

Islamist columnist Ibrahim Tenekeci of the pro-AKP daily Yeni Safak wrote in a July 23, 2014 column titled “Of Men and Jews” (in which he refused to capitalize the term “Jew” except where he quotes another author):[3] “This title, reminiscent of John Steinbeck’s Of Mice and Men, belongs to [Islamist author] Nurettin Topcu, not me. Topcu wrote three articles in 1967: ‘The Islamic Cause and Judaism,’ ‘Money and the Jew,’ and ‘Of Men and Jews.’ These articles define jews as the eternal curse of mankind. ‘Those that attack to destroy the building of absolute truth,’ ‘those who reject all moral values,’ ‘the bloody and sinful hands,’ ‘the evil that replaces the good’ – All these are the jews.

“Now let’s read a few sentences from these three articles:

“‘Men and Jews’: ‘This is the tribe that has no conscience or remorse, does every cruelty to mankind in both the material world and the realm of spirituality and thought.’ ‘The Jewish tribe has been sent to the world in order to destroy every good thing, every strong foundation, and all liberating truths.’ ‘It is an instinct of the Jew to do evil to men and to humanity.’ ‘The Jew cannot live without evil and troublemaking.’

“‘Money and the Jew’: ‘No doubt, Allah has created the Jewish tribe as the curse to mankind.’ ‘There is no life that the poisonous hand of the Jew does not touch, no society to which the Jew does not bring decay.’

“‘The Islamic Cause and Judaism’: ‘We must search for the remedy to Jewish disasters in the very soul of Islam.’ ‘As long as there is an Israel, the Islamic and Turkish worlds are in danger. The future belongs either to one or to the other.’

“Some say that the Zionists and the jews are not one and the same. Let’s look: Who is it that commits massacres and shameful deeds? The Zionists. Who are they? Are they Muslims or Christians? No, [they are] Jews. Therefore, we know who the murderers of humanity are.

“Who says ‘take two lives with one bullet’ to incite the murder of pregnant women?…  Who is it who lacks all human values? Quick answer: The Jews…

“Let’s take a few more quotes from Nurettin Topcu’s [book] Money and the Jews: ‘There are two enemies of humanity, two Satans: Money and the Jew. The Jew idolizes money, and money idolizes the Jew. If there were no Jew, money would not have an owner.’ ‘Money and Jew live in symbiosis… The fight against the imperialism that is ruled by the Jews is the fight for freedom.’

“Yes, money is the Jew’s weak point. Imposing economic embargos, stopping the purchase and sale of their goods, and cancelling all trade treaties [with Jews] will prove a more useful method [than any other of fighting them]. This will hurt them, and even if it does not, we will have done something [against them]… We are obliged to protest against their cruelty. Our nation’s destiny is to stand with the victim.”

Islamist Turkish columnist Faruk Kose wrote in the antisemitic and Islamist daily Yeni Akit:[4] “There is no way to remedy the loss of lives [in the Gaza war], but until we arrive at the ‘great revenge time’ we must keep the pain alive in our hearts and rebuild Gaza with no delay, and remedy [the Gazans’] material losses.

“The material losses are great. As a result of the attacks by the ‘Jewish murderers’… the superstructure is in ruins and the infrastructure has collapsed. The damages total $8 billion. This is a big number for a little territory such as Gaza…  and its reconstruction will take 20 years.

“Naturally the money needed to rebuild Gaza will come from the world’s Muslims… With Muslim aid, Gaza will be rebuilt – until the ‘herd of murderers’ attack once again and ruin it.

“So should we not build Gaza out of fear that it will be destroyed again, and should we allow tens of thousands of our Gazan brothers to live in the Stone Age? Of course not! However, it is time for ‘Palestine-loving Muslims’ and the ‘father of Gaza’ [i.e. Erdogan] to put an end to this vicious cycle. It is time to make the ‘culprits’ and the ‘culprits’ helpers’ pay for the damages.

“The Muslims will build and the Jews will come and destroy[?] No more of that! Damages must be collected from the Jews. My proposal is this: The money to rebuild Gaza must be paid by [Turkey’s] Jewish businessmen. There should be a mandatory ‘special tax’ for the ‘Gaza Fund,’ to be collected from local and foreign Jews doing business in Turkey, [from any Jews] who have commercial ties to Israel, and from any [Turkish] business partners [of Jews]. All Jews who have any connection at all to the ‘Zionist/Jewish terror base Israel’ that wrecked Gaza, and any [Turkish] company that conducts business dealings with Jews must be forced to pay the ‘Gaza Fund’ tax.

“Since it is they who destroyed, let them pay for reconstruction. All those who assisted the people who caused the destruction must pay this penalty too… If they pay the bill, they might stop [destroying]. Most certainly they will stop.”

Bilecik University Physics Department Head: “Treblinka Will Be Ready Soon; [We Are] Constructing The Railway To Transport Jews At The Moment”

In a July 24, 2014 response to the publication by the Israeli daily Haaretz of an article on antisemitism in Turkey, penned by U.S. academic Louis Fishman, Professor Ali Ihsan Goker, who heads the physics department at Bilecik University, tweeted: “Treblinka will be ready soon; [we are] constructing the railway to transport jews at the moment.”

Fifteen minutes later, he tweeted, “if I was PM I would round up the stranded israelis [tourists] here [in Turkey] and send them to deportation camp at once.” 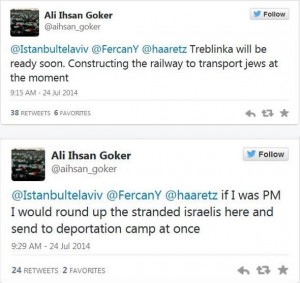 No action was taken against Goker; the following month, he was awarded a grant by TUBITAK, the prestigious Turkish Science and Technology Institute.[5]

The pro-AKP Islamist daily Yeni Safak reported on statements by Bulent Yildirim, the head of the terrorist organization IHH that presents itself as a charitable organization, in which he said that the only ones who can stop Israel’s actions are the Jews in Turkey, and that. Israel’s spoiled-brat attitude could spell the end of the Jewish communities in Turkey. He noted that the IHH was currently planning its next activities, which were to take place all over Turkey, including at synagogues and at Israel’s diplomatic missions, and added that it was becoming increasingly difficult to restrain its young members from attacking Jews.

[3] Yeni Safak (Turkey), July 23, 2104. This pro-AKP Islamist daily is considered to be the mouthpiece of the AKP government.

[4] Yeni Akit (Turkey), September 7, 2014. The editors and columnists of this virulently antisemitic pro-AKP daily newspaper, formerly known as Vakit, always accompany President Erdogan in his private jet in all his travels.

[5] Additionally, on July 18, 2014, AKP MP Samil Tayyar tweeted, addressing Israel: “May your breed be extinct; may new Hitlers be upon you.” He was not questioned on or disciplined for his statements.