More than 85 per cent of British Jews think Jeremy Corbyn is antisemitic, according to polling carried out for the JC. A similar percentage believe there are significant levels of antisemitism at all levels of the Labour Party.

The survey, undertaken by polling company Survation between August 12 and September 4, shows that 85.9 per cent of British Jews regard the Labour leader as antisemitic, while just 8.3 per cent believe he is not.

In a recent Survation poll among the general public, 39 per cent said Mr Corbyn was antisemitic.

Among British Jews, only 1.7 per cent believe Prime Minister Theresa May to be antisemitic, with 89.9 per cent saying she is not. Just 6.1 per cent say that Liberal Democrat leader Vince Cable is antisemitic. 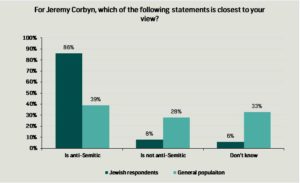 Survation also asked British Jews for their views on the main parties. Respondents were asked to rank Labour, the Conservatives, the Liberal Democrats and UKIP on a scale of 1-5, where 1 corresponds to the statement hat “there are very low levels of antisemitism among the political party’s members and elected representatives”, 4 to the belief that “there are high levels of antisemitism with the party’s members and elected representatives” and 5 to “very high” levels.

According to the survey, 85.6 per cent of British Jews rated Labour at either 4 or 5, suggesting they see antisemitism as having significantly infiltrated all levels of the party. 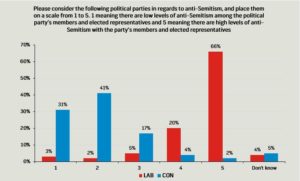 In this latest survey, only 6.1 per cent ranked the Conservatives at 4 or 5 on the same scale, with 11.2 per cent ranking the Liberal Democrats in one of these two categories. Only UKIP came anywhere close to Labour’s rating, with 56.9 per cent of Jews ranking the party at four or five on the scale.

In a poll earlier this month among the general public, 43 per cent said there were “high” to “very high” levels of antisemitism within Labour.

The poll was conducted after the Labour leader was at the centre of further rows. In July, photos of Mr Corbyn surfaced from a 2014 event in Tunis, where he laid a wreath commemorating the terrorists behind the Munich massacre of the Israeli Olympic team in 1972. In August, a video emerged of him speaking at a 2013 event, during which he said of British “Zionists”.

“They clearly have two problems. One is they don’t want to study history, and secondly, having lived in this country for a very long time, probably all their lives, they don’t understand English irony either.”