US Secretary of State Mike Pompeo and Prime Minister Benjamin Netanyahu on Wednesday accused Iran’s supreme leader of calling for the genocide of Jews over a graphic endorsing Israel’s destruction that invoked the term “final solution.”

The poster shared on Iranian Supreme Leader Ayatollah Ali Khamenei’s website showed people celebrating at the Temple Mount compound in Jerusalem after apparently capturing it from Israel as a Palestinian flag is raised over the Al-Aqsa Mosque.

“Palestine Will Be Free. The final solution: Resistance until Freedom,” the text on the poster says.

The term “final solution” usually refers to the Nazi policy of extermination carried out against Jews during the Holocaust.

“The United States condemns Supreme Leader Khamenei’s disgusting and hateful anti-Semitic remarks. They have no place on Twitter or on any other social media platform,” Pompeo wrote on Twitter. “We know Khamenei’s vile rhetoric does not represent the Iranian people’s tradition of tolerance.”

Highlighting a pair of tweets from Khamenei’s English-language account accusing Israelis of behaving like a “cancerous tumor” and calling for arming Palestinians in the West Bank, Pompeo said Iran’s leader was backing genocide of Jews.

“The leader of the world’s top sponsor of terrorism and anti-Semitism denies the Holocaust, sends money and weapons to anti-Israel terrorists, and now has invoked the Nazi call for the Final Solution,” Pompeo said.

He added: “I ask all nations: Is this someone who can be trusted with deadly weapons?”

Pompeo appeared to be referring to the expiration in October of the UN arms embargo on Iran, which the US is pushing to extend. 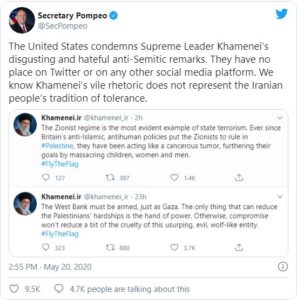 Netanyahu also accused Khamenei of endorsing the “Final Solution” and issued a stark warning to Iran.

“Khamenei’s threats to carry out ‘The Final Solution’ against Israel bring to mind the Nazi ‘Final Solution’ plan to annihilate the Jewish People,” a statement on the Twitter account of the Prime Minister’s Office said.

“He should know that any regime that threatens the destruction of the State of Israel faces a similar danger.”

Khamenei has called for Israel’s destruction on numerous occasions and frequently refers to Israel as a “cancerous tumor.”

The poster on his website, which appeared to have later been deleted, included people waving flags of Iran-backed militia groups, among them the Lebanese terror organization Hezbollah.

It also included a large portrait of Gen. Qassem Soleimani hung on the Al-Aqsa Mosque in Jerusalem, which is under Jordanian custodianship.

Soleimani, who was killed in January by a US drone strike in Iraq, was the head of the Islamic Revolutionary Guard Corps’ Quds Force, which oversaw Iran’s support for Hezbollah and other armed groups committed to destroying Israel. “Quds” means Jerusalem in Arabic.

Iranian state media published a letter Wednesday purportedly written by Soleimani shortly before he was killed. The letter was addressed to Muhammad Deif, the head of Gaza-based terror group Hamas’s armed wing.

“Everyone should rest assured that no matter how much pressures increase and sanctions are intensified, the Islamic Republic of Iran will not leave Palestine and Palestinian people alone,” the letter said, according to the Fars news agency.

The letter also said Iran would not “give up its duty” of “defending Palestine” and that “enemies of Palestine are our enemies and this is and will be our policy.”

The release of the letter comes days before Quds Day, which Iran has marked since the 1979 Islamic Revolution. It is usually marked by regime-orchestrated demonstrations across Iran against Israel and expressing support for Palestinians. It is held on the last Friday of Ramadan, which this year is May 22.

“Quds will not be forgotten. Quds will not remain under occupation of oppressors. The Palestinian lands will one day be liberated. We do not accept and tolerate this cruelty, oppression and aggression at all. We will commemorate the highly important Quds Day,” Iranian President Hassan Rouhani was quoted saying by Fars during a cabinet meeting Wednesday.

Over the weekend, Rouhani said Iranians living in areas considered to be at low risk of a further coronavirus outbreak will be allowed to attend Friday prayers including Quds Day commemorations.

In Tehran, which is deemed high-risk, a “symbolic ceremony” will be performed with a motorcade supervised by the Revolutionary Guards.

Experts both at home and abroad have voiced skepticism about Iran’s official figures, saying the real toll could be much higher.

Khamenei’s criticism also came as Iran and Israel were believed to be locked in cyberwarfare, with the Jewish state said to be behind a cyberattack on an Iranian port earlier this month in response to an attempted breach of Israel’s water infrastructure by the Islamic Republic.