Cambridge University has adopted the IHRA working definition of antisemitism.

The decision to adopt the definition – including all 11 examples – was made by the University’s General Board on 4 November. The university included two clarifications made by the Home Affairs Select Committee in 2016, which stipulate that criticism of the Israeli government was not antisemitic without additional evidence to suggest otherwise. The institution had previously resisted calls to adopt the definition, including by Education Secretary Gavin Williamson.

The Board of Deputies of British Jews, the country’s EJC affiliate, welcomed the move and called on other universities to follow suit: 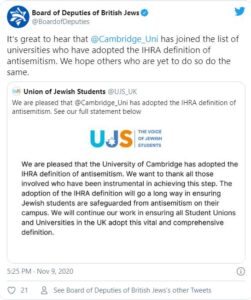