Official hate crime statistics published Thursday by the Home Office show that despite making up a tiny fraction of the UK population, Jews were the victims of nearly a quarter of all hate crimes.

The report also showed that between March 2021 and March 2022, there were 1,919 hate crimes targeting Jews, an increase of 49 per cent from the previous year. 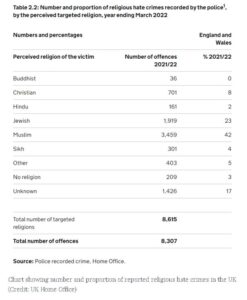 It is believed, as has previously been the case with other periods of Israeli conflict, that this dramatic increase was due to the flaring of hostilities between Israel and Gaza in May of 2021. 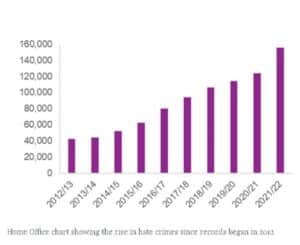 Jews were the second most commonly targeted religious group behind Muslims with Buddhists being the victims of the fewest number of hate crimes last year.