Aalst – Participants in a street celebration in the Belgian city of Aalst paraded giant puppets of Orthodox Jews and a rat atop money bags.

The umbrella groups representing Flemish and French-speaking Jews in Belgium, FJO and CCOJB respectively, complained to the federal UNIA watchdog on racism about the display. “In a democracy like Belgium, there is no room for such things, carnival or not,” they wrote.

The group Vismooil’n created the two puppets as their 2019 theme for the Aalst carnival, the local edition of celebrations that take place throughout parts of Europe and Latin America annually in anticipation of Lent, the 40-day period before Easter. Participants prepare floats and dance routines, parading them through town on Carnaval.

The Vismooil’n group, a veteran participant that specializes in hyper-realistic puppets, created the display to address rising prices, they told a Belgian blogger last month. They titled the work “Shabbat Year.”

The display features two giant puppets with streimels, hats favored by some Orthodox Jews, in pink suits. They both have sidelocks. One of the puppets is grinning while smoking a cigar and extending a hand, presumably to collect money. That puppet has a white rat on his right shoulder. Both puppets are standing on gold coins and have money bags at their feet.

As can be seen in the full carnival video (starting at 3:23), there are dancing figures in the performance wagon with the antisemitic characters, with purses that open provocatively.

Also note the following display: a plane spraying material for playing the Shalom Aleichem. We tried to understand the message. There is a slogan we could not translate. We look forward to your assistance.

In the background is a round window reminiscent of the architecture of many European synagogues and a small box resembling a mezuzah on its right-hand side.

“Everything has become so expensive [we though that] if we do 2019, there would be no more money left for next year,” a member of the group was quoted as saying. “So we all went quiet until we smartly decided to go for the Shabbat Year and that was that. So simple.”

In 2013, a different group designed for the Aalst carnival a float resembling a Nazi railway wagon used to transport Jews to death camps.

The people who designed the float, known as the FTP Group, marched near the float dressed as Nazi SS officers and haredi Orthodox Jews. A poster on the wagon showed Flemish Belgian politicians dressed as Nazis and holding canisters labeled as containing Zyklon B, the poison used by the Nazis to exterminate Jews in gas chambers in the Holocaust. 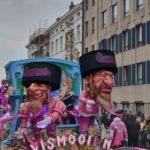 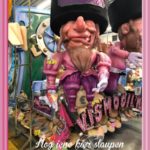 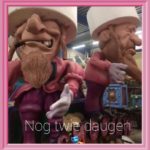